One step closer to the title European Capital of Culture

One step closer to the title European Capital of Culture

Nuremberg is applying for the title “European Capital of Culture 2025” – and FAU is right in the middle of it. The FAU creates a whole series of innovative and interdisciplinary projects, the most prominent is the Nürnberg Time Machine together with the Germanisches Nationalmuseum (GNM), the museums of the city of Nürnberg and the Stadtarchiv Nürnberg. In the second BID Book submitted now, these and other projects are presented.

On a total of 100 pages, not only the jury but also all interested citizens can of course delve into the projects and the thoughts behind them. The slogan “Past Forward” is central to the Nuremberg application. On the columns “Humanity”, “Activity” and “Community” very different projects are presented. The FAU is involved. 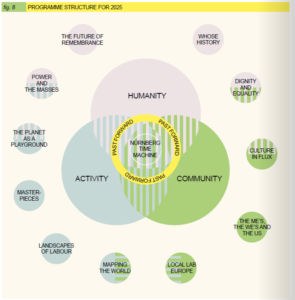 The Nuremberg Time Machine is one of the brackets of the entire application of the City of Nuremberg for the Capital of Culture. (Picture: Paul Blotzki, Christopher Biel)

Die Nuremberg Time Machine acts as a bracket for the entire application. The project is part of the European Time Machine project, which started four years ago. It enables the 3D reconstruction of historical city districts, AI-based exhibitions or interactive, history-based games. Prof. Dr. Peter Bell, Assistant Professor for Digital Humanities with a focus on art history, is one of the main people responsible for the Nürnberg Time Machine alongside Prof. Dr. Andreas Maier, Chair of Machine Intelligence. As a service hub, web presence and data cloud, it is becoming a digital treasure chest from which all past-forward projects draw and into which they simultaneously feed their findings and data. However, not only scientists themselves are to benefit from this, but also all interested parties who can contribute their own objects to the collection and at the same time gain access to results.

In addition to the Nürnberg Time Machine, where researchers from the humanities work closely with computer science, FAU is also involved in other key projects. The Institute for Theater and Media Studies will critically examine the work of Leni Riefenstahl, the UNESCO Chair of Education with a focus on culture and aesthetic education, a summer school and barcamps on the future of cultural education in Nuremberg and Europe. Together with leading personalities from all over Europe, the Centre for Human Rights Erlangen-Nuremberg (CHREN) is even planning its own master’s program on urban human rights policy. A hackathon will deal with ethical issues: On the one hand, data should be available as openly as possible, on the other hand, some finds and archive images are not freely accessible.

final spurt to the title Capital of Culture

Two cities are awarded the title “European Capital of Culture” every year. In 2025 it will be one city from Germany and one from Slovenia. On October 28th, the jury appointed by the EU will decide which of the applicants will make the race in Germany – in addition to Nuremberg, Chemnitz, Hanover, Hildesheim and Magdeburg are in the final round. Then it will also be decided whether Nuremberg and the participating partners in the region will get the chance to take people on a journey back in time, both locally and throughout Europe, and at the same time to take a look into the future – “Past Forward”.